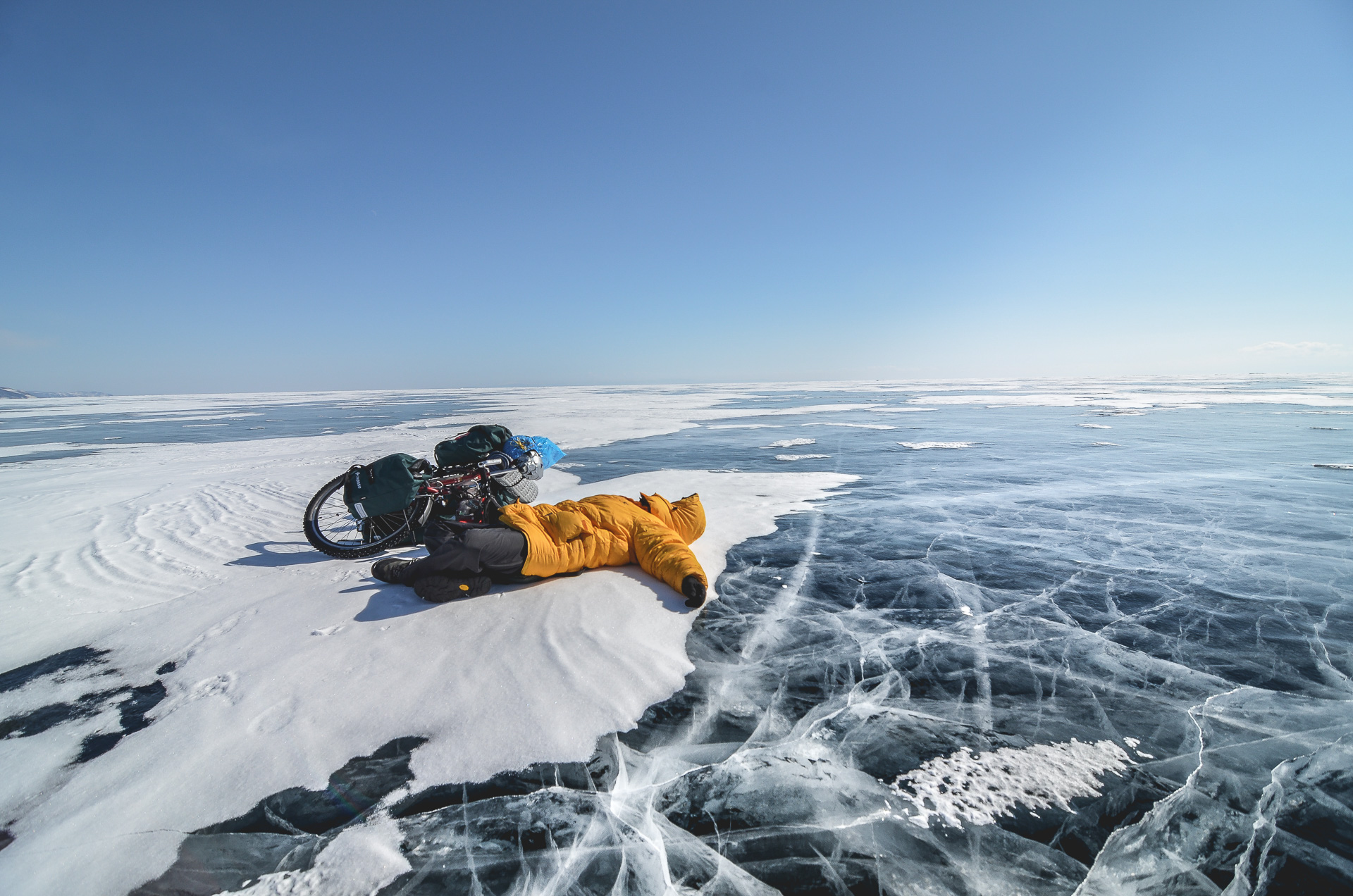 Among many questions regarding Baikal Ice Trip probably most common were those concerning famous siberian frosts.
– Was it cold? (Yeach it was.) The coldest temperature?? (-35ºC.) Weren’t you afraid of these frosts? (No. We were prepared for it) Does any gear breaks from such a cold? (yes. e.g. handlebars:)) Have you seen polar bears? (No. They live somewhere else)
So, today I’ll write about cold .

Another from the F.A.Q. – Couldn’t you go somewhere, where it’s warm? Mallorca, for example??

Well, I would recommend to read article “ciepło” (not translated into English), which I wrote long time ago, in 2007 Montenegro. One year later I went to Mongolia, where it also was warm enough, but the highest temperature record came in 2009 along with 3000km trip to Athens. Riding from 6 to 11 am and then 18 to 23 is really quite annoying. But what can you do if during the day temperature rises over 40ºC? It’s also hard to find a piece of land for siesta in Greece- everywhere some spikes, giant spiders, dead turtles. Or in Albania – among waste. It was then, when we agreed with my friend Wicher, next trip will be to polar circle. And so we did. In summer on the Perisan Gulf I discovered temperatures around 50ºC and I really do not recommend that to anybody. That’s when it came to me, – why not go to Syberia, making year’s temperature difference of 90ºC.

So, that’s the reason why we chose cold Syberia and Baikal.

28 th February, we get off the cosy train to set our feet on a snowy platform in Severobaikalsk. Giant clock on the station building announces triumphally – 19ºC. Welcome to Syberia.  And it’s only 3pm – the warmest time of the day. We put on our best clothes, balaclavas, thickest gloves, and whatever we got there. But it’s still freaking cold. We revolve around the city for few hours, looking for sim card, Internet, shop, hairdresser (sic!:)). Finally we evacuate to Nizneangarsk, 25 km North, hoping to find warm shelter at Marina Aleksandrovna’s, friend of a friend from a train. But Marina „ne beryot trubky”, which means “doesn’t answer the phone”. With each unsucessfull call we get more and more depressed, losing hope for warm first night at Baikal. Its getting late. At 8pm we’re in Nizneangarsk, –30ºC on termometres, no sign of anybody on the streets.

– Should we can stand next to the shop, as usual, and pretend we’re frozen cyclist? – suggests Wicher.

Nice idea, but hard to accomplish. It is already 8pm, it’s – 30ºC, so guess what, there’s no living soul around. The village shop is closed. Oh my, does it mean they also don’t like frost here?

Well, all that’s left is to ride reluctantly to the most northern side of the lake and put our tent there.

So we ride. Slowly, veeery slowly. Wicher grumbles that he doesn’t feel his fingers. And I’m mad on my moustache. Carefully cultivated for 2 weeks, it was supposed to protect me from the cold, but instead it’s a great place for snots and snow, making me feel even colder.

It’s not how we imagined the beggining, it’s not how it was supposed to end! Quick glance on the termometre doesn’t leave any hope. – 32ºC already.

And that’s when Sasha and Tanya flew straight down from heaven to save us.

– Where do you sleep? In a tent, you say? You’re out of your mind? You’re going with us!

So, first night we were lucky. In fact we liked it so much at Sasha and Tanya’s that we stayed there for 2 days, wondering, how to push away the moment we would really start our journey.

But it turned out we were lucky after all. First night after riding on ice we slept in a scrubby hut with a stove that produced more smoke than old locomotive. Let it smoke, maybe we won’t suffocate, as long as it’s much warmer than outside we like it here. The following day I broke handlebar, but – happiness in misfortune – I managed to push my broken bicycle to another hut.

Only after a week we were forced to set our tent on ice for the first time. We wanted to get as close as possible to crevasse – paradoxically it’s the safest place, the ice won’t break for the second time just next to old crevasse. Unfortunatelly, no crevasses today. All covered by treacherous snow. And the sun is setting down, temperature falling with every minute.

Maybe here? – I show the place 5 – 4 meters from our path, all covered by snow, the place that doesn’t differ in any detail from billion others snowy places on the lake. Thermometer shows – 20ºC. We put up the tent and throw our bags inside. Meanwhile it’s already – 25ºC. Quick piss and jump into the sleeping bag marks the happiest moment of the day, but what the hell? -30ºC ???. Wicher is cooking.

It takes some time to melt snow on our shitty stove.

Meanwhile Baikal is cracking angrily somewhere below us. Creaks, Squeaks. Crunches. From time to time you can feel slight shake – that may be just another earthqake – there are over 2000 of them each year, which means several a day.

– Ready! I see bubbles! – he screams after an hour.
– Let’s assume, it’s boiling – I mumble half-asleep.

Our food for astronauts just a minute after adding water becomes cold, yuck. It’s -35ºC. And we still need to boil snow for tea. „Ha, ha, I’m so happy my turn to boil will be only in the morning”, I think to myself, but just a minute later God punishes me for such selfish thoughts – I have to go to pee…

Well, how do you cope with physiological needs in such cold? „Just the same, only much faster” – once said famous Polish polar Marek Kaminski. I jump back into sleeping back, remembering his words. We don’t take off nor the pants, nor jacket, down jacket goes under the back, wet socks inside, I put on two new, dry pairs, and add warm (from staying in my perineum) down gloves. A cap covers the eyes, nose is hidden deep down in the sleeping bag.

Wicher is still fighting with boiling machine, and I’m swimming away into dreams of tropical beaches, palm trees and white, hot sand…

I’d even like to worry for a while, imagine a huge crevasse opening straight under our tent, that we fall down into the lake with no chances to survive. Statistically, chances for that are smaller than winning a lottery– but hey, somebody wins from time to time. But I’m too tired to worry about anything.

Wicher, on the contrary – in the morning he says he didn’t sleep half a night, imagining all the things that can happen. I woke up only from stronger iceshakes. Now it’s my turn to boil snow, and it’s no easier than in the evening. But it’s not the worst part – after eating you don’t have any more excuse not to get off your warm and cozy sleeping bag. You have to put your frozen shoes on and try to be positive in those unwelcoming conditions.

To be continued! Come back in a while.

Here’s a map. As you see, navigation is quite simple – you always ride next to the shore (in our case from N to S so coast was always on the right side). Here it seems like we’ve been cycling right next to the shore and sometimes it was the case, but mostly it was 1-5 km km from the coast. This yellow line in the middle of the lake is my trip to the centre of the lake – 25km one way 🙂 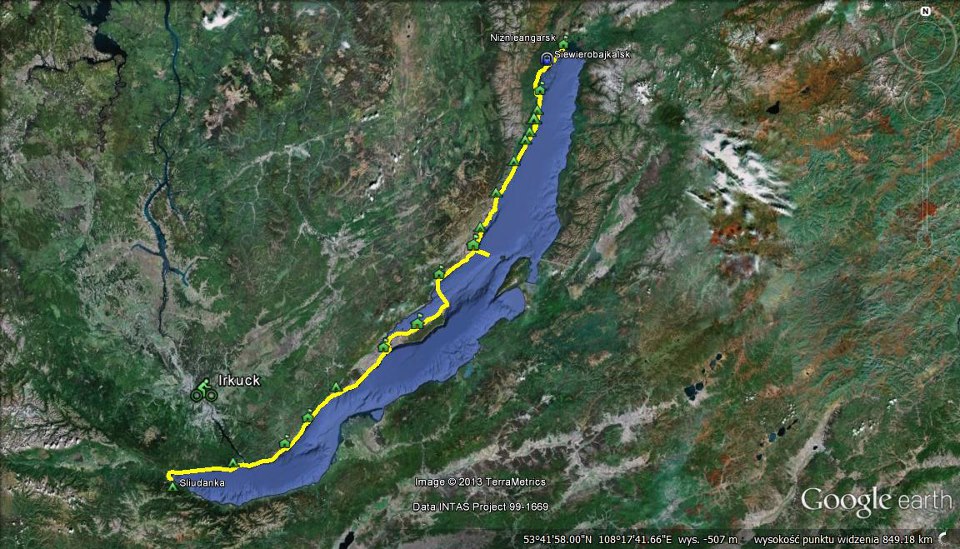