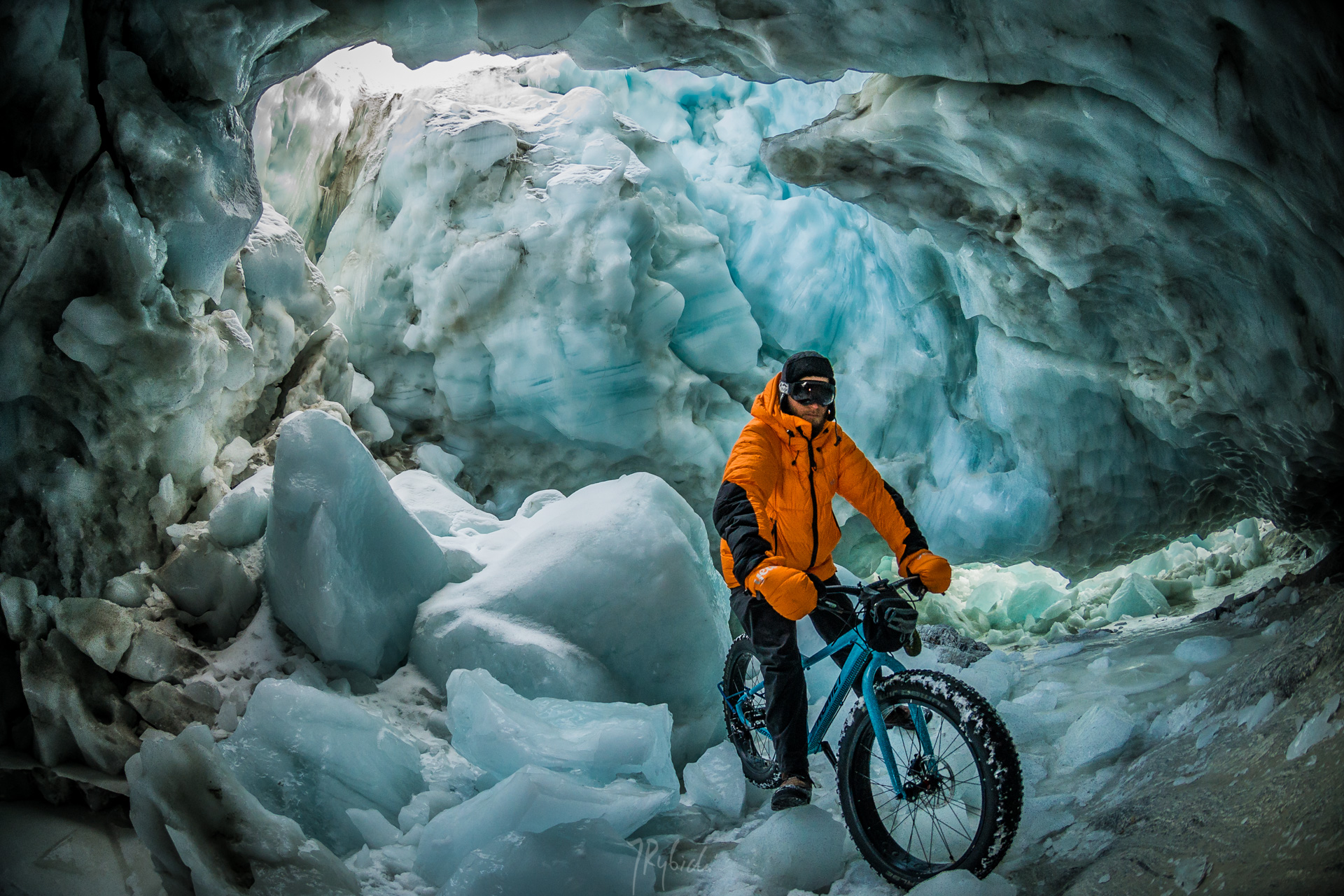 I like winter.
And I like riding a bike.
Who said that the only legitimate winter sports are skiing or snowboarding? I was cycling for many crazy-hot summers in Europe and Asia and finally I said enough. Going North turned out to be a reasonable solution, so together with my friend Wicher we cycled to Murmansk, far beyond polar circle. In winter 2013 we jumped on the next level, cycling frozen lake Baikal (Syberia, Russia). HERE you can find pictures, and HERE stories from that trip. Cycling in temperatures dropping below -30°C turned out to be so cool that we decided to find a new target for a frosty escapade. We chose Greenland because if there’s anything better than riding on the deepest lake on the planet, it is cycling the ocean.

Most people call me crazy. Well I don’t believe winter cycling is madness and it’s certainly not stupid. It’s just extreme fun in overwhelmingly beautiful landscape. This kind of a trip can end badly for people with certain psychological problems, irresponsible or without reasonable judgment of their own strenght. So you have to be more or less “normal” to do winter expeditions 🙂 I also believe that alomost every normal, fairly healthy man (who does not necessarily spend half a year on a bicycle) is capable of undertaking such challenges.  However, supervision of an experienced guide is highly recommended. Of course, it’s a difficult a journey. You often spend hours just pushing your wheels through deep snow, or uphill. Add no chance of any external support and you have enterprise several times harder than any trip in Europe, where at any time we can stop for good, cold, Coca Cola. Or beer.

So why to suffer? For those unforgetable, unrepeatable, life-changing experiences. For landscapes so vast you can even imagine. For knowledge of your body, brain and sould that helps you later with everyday struggle. For pure satisfaction. For a goal. For photographs, that intend to pass a fraction of this col beauty to you, sitting in front of your nice, warm and friendly computers.

There are few ways to travel around world’s largest island.  More or less as many as cycling travelleres who have been there. You can try to make a traverese the icecap, which is no fun, boring, and extremely difficult – no one has accually ever done that one bicycle. You can also ride along the frozen coast, which was our original plan. Unfortunately, global warming is speeding up, especially in the Arctic. 2016 winter was the hottest in the history of observation (and eventually 2016 became the warmest year, 2017 is going to be second in line) – there was almost no ice on the shore. We were forced to find another soultion – crossing the mountains, lakes and fjords of the central west coast on the Arctic Circle Trail (ACT).
Off-road riding on snowy mountains is not the same as riding on lake ice. On frozen Baikal lake we could use our old, simple mountain bikes, just equipped with spiked tires, but in Greenland they would be as useful as the raincoat in the Sahara. We chose to test the latest fashion – fatbikes – bicycles with tires at least 4 inches thick.
As long as the snow layer is no more than some 10 centimeters, our machines are moving like little tractors, slowly, but consistently. Here the size does matter – bike with 4.6 inches tires does a bit better than a “mere” four-incher.
Since the invention of fatbikes the route connecting the largest airport in the country – Kangerlussuaq – with the city of Sisimiut,  previously available only for sleds and scooters has become bicycle accessible. The overwhelming majority of those few cyclist who decided to try ACT made their life easier by assistance of dog sleighs or scooters. But I wanted to do it hard way. You don’t really feel the experience without getting close to the edge of your endurance, without sweat, tears and pain. It’s not that we want it. I think we subconsciously need it.
So there we were, pushing heavily loaded wheels, using all, incredibly rich cursing vocabulary of our language. Scooters passing us from time to time didn’t make us feel better. But some of them stopped and welcomed us with hot tee and cookies, and we love cookies! Our bicycles were lightweight – less than 15kg. After the bike comes a sledge, all packed with dry food, camping and photographic equipment, sleeping bags, clothes for every weather and other important stuff. Altogether it’s almost 30 kilograms, which constantly brings us down. Especially when trying to go uphill. 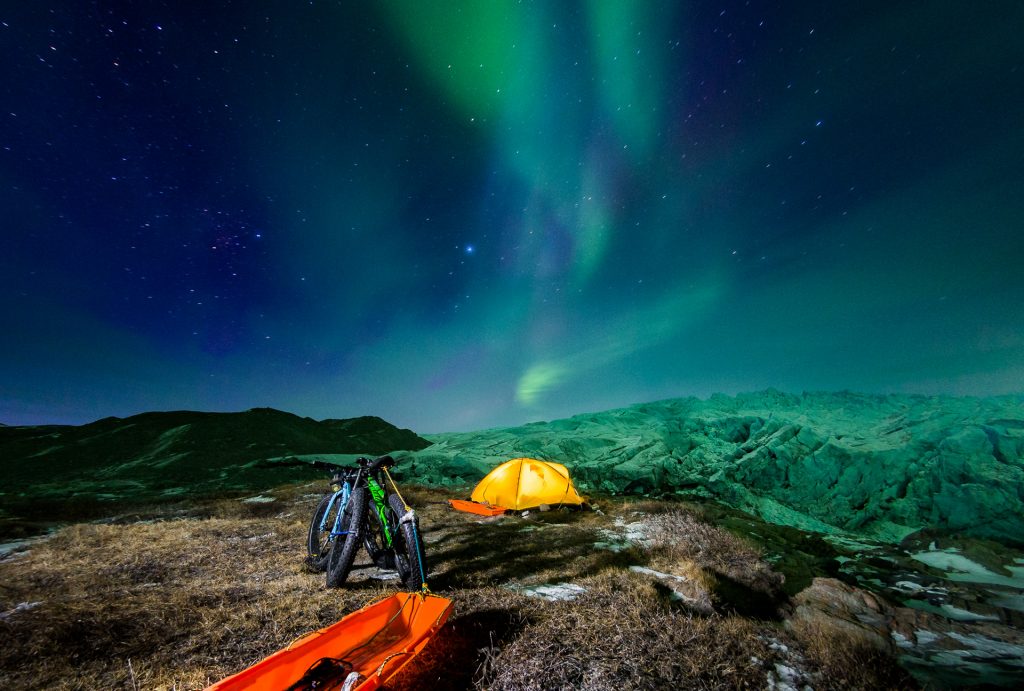 Lonely Planet marked Greenland as one of  ten hottest destinations to visit in 2016, and the island apparently stood up to the challenge, serving its residents unbearably warm winter. Do I have to mention that noone was too happy about it? The scenery of the Kangerlussuaq area lacking snow looks rather depressing. You can’t ride scooters or sleds, dogs are bored and so are people. it’s impossible to go skiing, nor for a hiking trip (and this is one of the favorite local activities). After two days of riding on dirt road there were holes in our plastic expedition sleds. Even the reindeers are unhappy because their white fur can easily be spotted on brown-grey background. And after they’re spotted it’s not long way to become a souvenir sausage in a duty-free shop at the airport, alongside such must-have souvenirs as a bear’s claw, a walrus tooth, or a big-breasted figurine carved in antler of the same poor reindeer.
Fortunately, the further inland we go, the cooler it gets. On the second day heavy snowfall drastically changed the landscape and it started to be really cold. We started to complain immediately, of course. Instead of a comfortable track created by snowmobiles, now we had to find our way through 15cm of snow, navigating with map, with no one to show us the way. In fact, for the next two days we haven’t seen a living soul that would point us the right way. Finally, a mist comes down and we completely loose orientation. It’s a funny feeling, though. there’s nothing around you, just absolute whiteness. The earth is blending with the sky and the bike seems to float, like in cartoon, on an empty piece of paper. The labyrinth goes crazy with no reference point. You can see the tip of your own nose but not your friend, few meters away. So I am alone, only me and space with no beginning or end.  If you stop the bicycle you lose the only available sound source. There’s absolute silence. You can’t even remember your favourite song to sing it in your head. Emptiness. We do stop for fun from time to time, discovering the world without stimuli. In medicine this is called sensory deprivation and is supposed to somehow change the frequency of brain waves. It is supposed to be a very relaxing experience, but not necessarily in the middle of Arctic, with no one to help you if you go crazy. 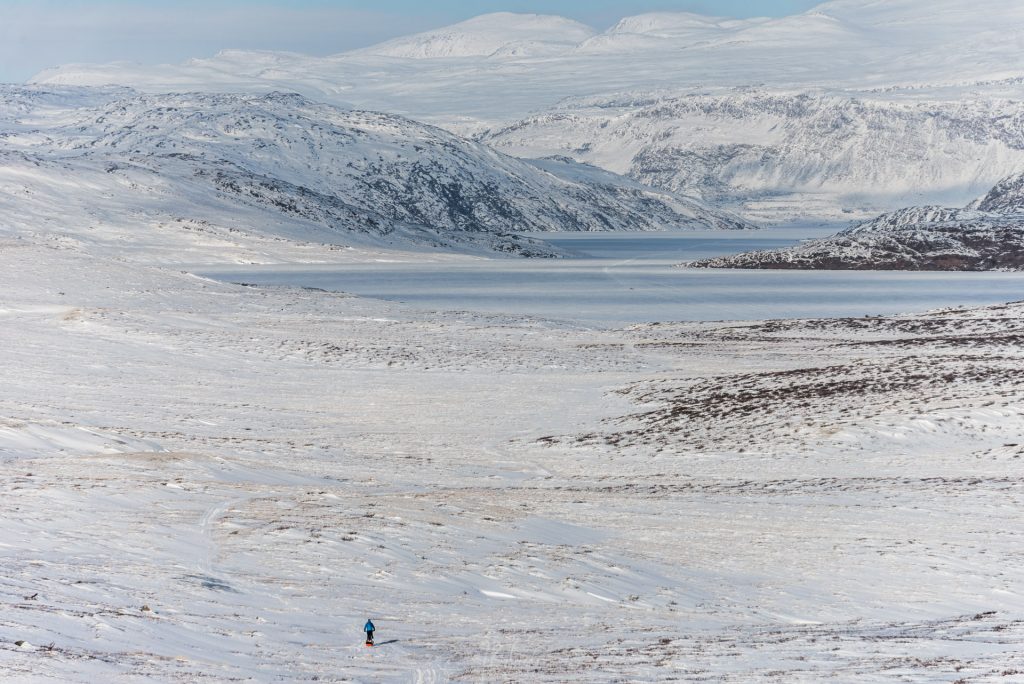 The starting point of our expedition is an airport, the biggest on the island. The settlement around it is inhabited by approx.. 500 people. On the other hand, our goal – Sisimiut – is the real metropolis, the second city of the country. Before we get there, we will come across dozens of lakes and mountains, including famous “killer mountain” of 900m height, which we ride up from the sea level just to return to the same level several hours later, completely exhausted. This is the last obstacle before the town, but we were too tired to go any further, so we put our tent not far from the outskirts. If you can talk of outskirts of such town 🙂 Well, yes, because this is the place where dogs live. hundreds, maybe thousand of dogs, used to pull sleds. Sound of their howling isn’t what you want to hear for half of the night.
But next day was to be a true nightmare. I believe after such trip a traveler deserves hot shower, warm bed and cold beer. Shockingly, we couldn’t get the latter. The lady at the counter shook her head with sad look and took away our (ridiculously expensive) cans of Tuborg commenting effeminately: “not today.” Unfortunately, the cashier was not gifted with linguistic skills and we had to wait for somebody who would uncover the solution to the riddle of not selling alcohol on Thursday morning. Finally it turned out that it’s forbidden to sell alcohol on Thursday before Easter. And it was Thursday before Easter. In this situation we were forced to find someone to invite us and help to solve the problem of improper celebration of well-done job. Luckily, local Inuits stood up to the task. But I’ll write about it in my next post, if I’ll find time for it someday 🙂
Meanwhile, enjoy another film from the trip:
You’ll also find this trip in 360 VR technology on my youtube channel if you have VR 360 headset 🙂